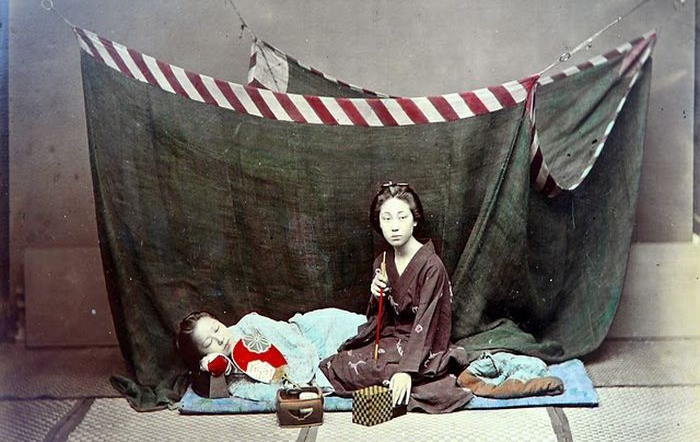 Beginning in the middle 1700s and continuing through the 1950s, the Japanese depended on mosquito netting (kaya) made from hemp fibers for protection against the ubiquitous summer mosquito. Homespun and hand loomed hemp was a common fiber used to make kaya but not the only material. Cotton and less common bast fibers from tree and bush bark were processed into fibers, woven into 13 inch wide rolls and hand stitched together into mosquito netting.

Ukiyo-e, pictures of the floating world, is a genre of woodblock prints and paintings that flourished in Japan. It was aimed at the prosperous merchant class in the urbanizing Edo period (1603–1867). Amongst the popular themes were depictions of beautiful women; kabuki actors and sumo wrestlers; scenes from history and folk tales; travel scenes and landscapes; flora and fauna; and erotica. Wikipedia

Even Japanese poets found inspiration from kaya. The famous poetess Chiyo from the Edo Period was challenged to make a poem of seventeen syllables referring to a square, a triangle, and a circle. She is said to have immediately responded,

"Detaching one corner of the mosquito-net, lo! I behold the moon!"
Kaya no te wo
Hitotsu hazushite,
Tsuki-mi kana!

The poetess envisioned the top of the mosquito-net, suspended by cords at each of its four corners, represents the square;--letting down the net at one corner converts the square into a triangle;--and the moon represents the circle.

The colors of hemp kaya varied from beige, green, indigo, brown and some had small stripes running the length of the fabric panel. 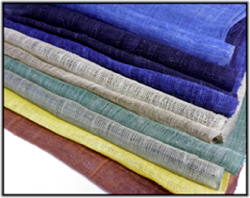 All hemp fabric colors fade over time into charming variegated muted tones. Only natural organic dyes were used to color the kaya.

Mosquito net hemp fibers came in both thick and thin diameters. The kaya with large hemp fibers were bulky, heavy, and somewhat difficult to hang but once positioned remained in place for the season. The thinner fiber kaya were lighter, simple to set up and easily relocated from place to place, and were especially popular with people who traveled.

Kaya is a diverse fabric. It can be made from hemp, cotton, a mix of both and other bast fibers (https://en.wikipedia.org/wiki/Bast_fibre). Bast kaya is the rarest, heaviest, thickest very uneven fibers and most expensive. The next heaviest kaya is made of hemp (asa) which usually has thick uneven fibers. Then there is kaya made up of a mix of hemp and cotton. And finally, there is all cotton kaya which is lighter weight and mostly thiner fibers.

As mentioned, kaya was used to protect people from annoying mosquitos. However, Japanese poet and Zen Buddhist monk Ryokan (1758 - 1831) slept under mosquito netting in the summer, not to prevent being bitten by an insect, but to avoid squashing one inadvertently while he slept, or so the legend goes. Buddhist tenets prohibit monks from killing any creatures, even insects, and the kaya served well those devoted monks who solemnly adhered to that principle. 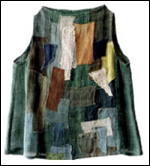 Many of our kaya customers enjoy making passageway "noren" and/or widow curtains from the kaya they purchase. 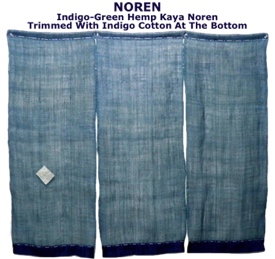